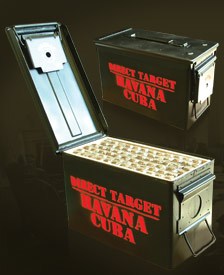 For the first time in more than a week I am able to sit down in front of a computer and do some work. Last week while in the city of brotherly love I managed to mess my back up. Since then I have been dealing with sciatic nerve issues that prevent me from standing straight or walking without the use of a cane.

I have however begun to smoke cigars for enjoyment and reviews again to forget about the pain for a while. This cigar was gifted to me from Victor over at The Cigar Agency and without futher adieu I bring you the review.

Appearance and Construction (17/20): The fact that these cigars come packaged in an authentic ammunition canister is pretty cool but let’s face it you can’t smoke that. The cigar has a nice looking wrapper with some significant veins. The cigar is banded at the foot with the name of the smoke and is rather simple but it gets the job done. Upon inspection of the cigar there are no soft spots, and while some veins are visible at the foot it does not appear that they will effect the draw. One thing that struck me as strange was the wrapper which felt a little bit thick. Because of this I decided to hole punch the cigar.

Flavor & Notes (27/30): The prelight draw of the cigar seemed a little dry and earthy to me. Eagerly looking to get into the review process again I lit this smoke up and was a little surprised on how enjoyable it was. While the cigar did not have much complexity it had notes of wood that remained throughout the smoke. In the beginning there were some spices especially through the nose but they faded before the first third was up. But the consistency of the wood flavors on both samples were a very enjoyable experience.

Burn/Ash/Draw (22/25): The cigar had some burn issues and while it never canoed it did burn very jagged and I think this had to do with the thick wrapper on the cigar. But at the same time it burned very slow and it took me almost 2 hours to smoke my second sample. The ash was firm and around the 2″ mark I ashed well before the cigar was ready to. I believe I could of gotten another inch with ease. The draw was acceptable, with a semi resistance. I am sure a straight cut would of relieved the resistance.

Overall (22/25): I was surprised by this mild to medium bodied cigar. A lot of companies that make their own cigars that are new to the premium marketplace fail. This cigar however is a winner, and I look forward to revisiting the brand in the winter as the wood notes would go well by the fire on a cold snowy day.