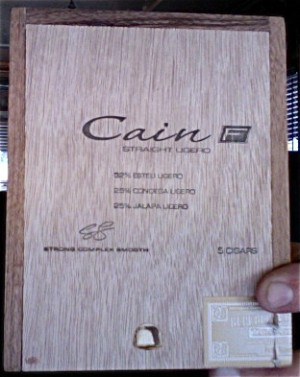 The Cain F which stands for Fuerte is a special edition in the Cain series. These sticks are 82% ligero compared to the 77% ligero in the maduro line. These 5 packs were available to retailers who took advantage of a special purchase order from Oliva cigars. In turn Oliva provided shops with these 5 packs to either a) sell or b) offer as a freebie to those who purchased a full box. I’ve seen this done both ways at many stores. The best place to buy the Cain online is the Chicago Cigar Company, so be sure to visit them for the best prices on this cigar line.

Appearance and Construction (18/20): The Cain F features no cigar band in the box of 5 cigars. The wrapper is glistening with oil and has virtually no veins. There is a slight tooth to this well packed stick that has no soft spots at all.

Burn/Ash/Draw (24/25): The burn of this cigar is near perfect. It never needed to be touched up though there was a slight waviness to it. The ash was dark and slightly flaky although it did hold on strong. The draw was excellent and the stick produced a decent amount of smoke.

Overall (23/25): These cigars are not for the weak. The strength and nicotine will know you on your ass even if your a seasoned cigar smoker. Despite being strong the cigar is smooth and refined due to the triple fermentation process. I rather smoke the maduro but these sticks are not so distant second in the Cain family.