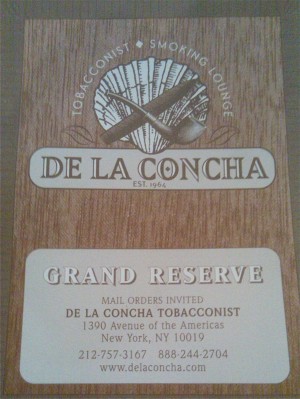 I’ve been to De La Concha on 6th Avenue between 56th and 57th street numerous times but until the other night I was not aware of the house cigar. When GM Ron Melendi joined our monthly cigar club over at Club Macanudo for cigars, food and drink he brought with him some of these sticks to hand out and I knew right then and there these cigars needed to be reviewed.

De La Concha is a great place to smoke with tables and chairs looking out on to the Avenue making for an interesting experience. Despite the shop being frequented by corporate CEO types there is a camaraderie and everyone is welcomed. (And if your lucky you can run into former boxer Renaldo Snipes who is ridiculously funny and a great guy!)

The De La Concha Grand Reserve was born in 2003 and are made by Pepin Garcia. The cigars came out within months of the Tatuaje line and may be NYCs best kept secret.

Appearance and Construction (17/20): The De La Concha Grand Reserve is a well-rolled oily cigar with minimal veins. The cigar comes in bundles of 25 and they have no band. The stick is a little bit light in the hand but there are no soft spots. The one negative here is the foot of the cigar is a little bit loose.

Flavor & Notes (28/30): The foot of the cigar reminds me a jelly ring. There is some sweet cherry notes and chocolate. The draw prior to sparking this stick has spice and some mocha. Once the cigar is lit there is no doubt that this is a Pepin Garcia smoke as there is an onslaught of pepper that is similar to the blue label Pepin cigar. After a few pulls the pepper fades and the cigar reveals notes of earth and a very faint mocha, but there is still a lot of spice through the nose. The second third of the cigar mellows out slightly or perhaps I’ve adapted. The notes are earth, spice and the teasing of mocha. The final third of the cigar the mocha profile begins to emerge with a touch of anise. The earth and spice move to the background but due to the short finish it never overpowers.

Burn/Ash/Draw (24/25): The cigar burns remarkably even with the thinnest of burn lines. The very light color ash that borders on white is strong , with no flake and I managed to hold the ash for half the cigar. The draw is a little on the loose side, but only by a notch.

Overall (23/25): This cigar has to be the best kept secret in NYC. While it reminds me of a cross between the Tatuaje red label and the Don Pepin blue label the cigar is different. This cigar is a perfect daily go-to and is hands down the best house cigar I’ve smoked to date. If you stop by De La Concha tell Ron I said hello!