There are so many cigars in the La Flor Dominicana library that I have skipped over during the 3 years I have worked on this site. Some of them are due to cost, and some of them are because I like to smoke them as a social cigar. By this I mean I smoke them, while talk hanging out with friends and don’t really get lost in the review as I enjoy the company.

The other day I woke up while on vacation to find a note from Andrew who is the VP of Sales for La Flor Dominicana and the sock-less wonder was the second person to make the comparison to me and Colt Ford. In honor of that I reached into my humidor and decided to review the Cameroon Cabinets from La Flor Dominicana.

Our Cameroon Cabinets are very limited because we only use aged Ligero Cameroon wrappers, dark and oily. We blended these cigars with Dominican and Nicaraguan filler and binder. The result is a smooth full bodied cigar.

Appearance and Construction: This cigar is darker than most Cameroon cigars but that is to be expected as the wrapper is Ligero. Ligero is one of the top leaves of a tobacco plant and therefore gets more sunlight which results in a darker wrapper. There are some veins present but none of which stand out and the wrapper has a fair amount of oils visible to the eye. The roll of the stick is fair and in the hand there are no soft spots while feeling fairly heavy. The band of the cigar is brown and gold which is different the classic LFD colors. 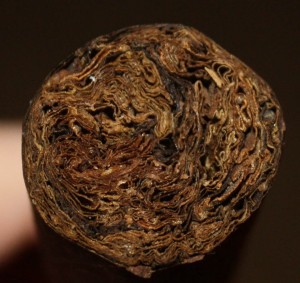 Flavors & Notes: I don’t know what it is about La Flor Domicana, but their cigars as well as a well aged Opus X have the most amazing cold draw. The rich molasses is heavenly and inviting. I often spend some time enjoying the draw on a good LFD before lighting it up. The foot of the cigar serves up much of the same with a little extra spice as well. Once the cigar is lit some of that molasses tries to hold on, but what you get is a classic Cameroon sweetness to start. The first third has sweetness, wood, and a touch of rich molasses. The second third of the cigar introduced a note that is new to me, wheat. The cigar reminds me of lightly toasted whole wheat bread. The sweetness remains and is more of an after though, reminding me of subtle cocoa and a woody finish. In the last third of the cigar the sweetness really takes hold with notes of sugar and cinnamon with a nice woodsy finish.

Smoking Characteristics: The aroma, it isn’t often I lead with it in this section but it is outstanding. In the beginning I was still able to detect the molasses notes of the cold draw on the aroma before they gave way to a rich delectable nose. The cigar burned incredibly well, with a nice thin carbon line and a solid ash that held just short of half the stogie. The draw was perfect with a nice amount of smoke production.

Conclusion: Outstanding. This limited production cigar is really an all-star of the La Flor Dominicana line. Incredibly smooth and robust with a nice flavor profile made this a dream to smoke. If your local shops have them, buy them. You will not be disappointed.