I think one of the things I miss the most is the ability to light up at a bar drinking an ice-cold beer from the tap. Thankfully there are a few places here in Gotham where you can do this although it has become increasingly more difficult.

Earlier this year Matasa in Santiago, Dominican Repuiblic announced they would release a cigar meant specifically to smoke while drinking beer, a Oktoberfest style beer. At first I was skeptical because unless you have a man cave or a friendly neighborhood B&M that allows you to BYOB the chances to properly enjoy such a cigar might be rare. The cigars are available in two sizes, Bavarian (5.5 x 52) and Über (6 x 65). The MSRP of the Quesada Oktoberfest $7.95 and $8.95 respectively.

The cigars are due out later this month.

Appearance and Construction: The Quesada Oktoberfest features a dark looking wrapper that Matasa calls, “Cibao”. To the naked eye, the cigar looks like a dark oily maduro. There is one medium-sized vein that stands out, but otherwise this is a gorgeous leaf. There is some tooth present, and in the hand the stick has a nice weight and is very firm to the touch. The band features the Quesada Q and the colors of Germany. Overall, one very attractive smoke. 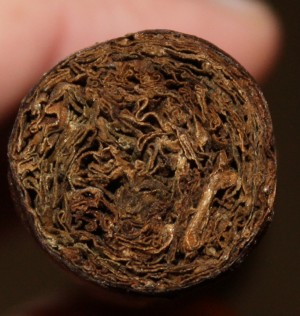 Flavor & Notes: The foot of the cigar of the Quesada Oktoberst fest is smoky to the nose, with some subtle spices. The cold draw serves up some notes of earth, and smoked wood. For the purpose of the review I paired a sample with Samuel Adams Oktoberfest. I will add that I smoked a couple without the beer, and while good the OKT beer really brings the nuances of the cigar out. Once the cigar is lit a subtle bitterness that fades with the first sip of beer. What remains is a nice dark chocolate note and some wood that boarders on oak.  As we enter the second third of the cigar there are some leather notes that join a mix of dark chocolate, and nuts. Each sip of beer really bring the notes out. The last third of the cigar becomes the smoothest and richest part of the smoke. The dark notes of chocolate become slightly sweeter and the notes of nuts extend into the nice finish of the cigar.

Smoking Characteristics: This slow burning cigar burns like a dream, with a nice medium to dark color ash that holds fairly well. The draw was perfects with a nice toasty aroma to the nose. The cigar burns nice and slow and I drank 2 bottles of beer with my cigar which was the perfect way to end the day.

Conclusion: I figured the name Oktoberfest was just a marketing ploy, but this cigar is no gimmick. As stated in the review one can enjoy it without the beer, but to truly experience the cigar it should be paired with a hearty beer, preferably, an Oktoberfest style one. I wish I could keep the box I have to give away, but to be fair we will divide the box into 4, 5 packs.

Contest: Thanks to the fine folks at Matasa cigars I have a box of cigars to give away. Instead of one winner, we will give away 4, 5 packs of cigars. I was going to make it some elaborate contest, but all you have to do is leave a comment below. We will randomly selects 4 winners at 11:59pm on Monday night and announce the winners on Tuesday. Good Luck!