According to Charlie Torano, “Our new brand Loyal is dedicated to my father’s long standing commitment to provide exceptional quality cigars without breaking the bank. To him cigars were never a far reaching luxury, but one of life’s simple pleasures”. These pleasures could go away if we do not get involved in stopping the FDA.

Appearance and Construction: While not a fan of a 60 ring cigar, the 56 ring over-sized Robusto might turn out to be ok. The Ecuadorian Sumatra wrapper has a nice amount of oils and tooth while not having any major veins. The cigar is as firm as they come and finding a soft spot in impossible. Finding flaws in the roll is very possible. The roll is porous in spots, and the cap is poorly  applied, but thankfully 9 times out of 10 these turn out to be purely aesthetic. I assume this is more common in cigars that are less expensive due to the lower level rollers used to make them. The band denotes Loyal in silver over burgundy, while Torano is in silver over black. 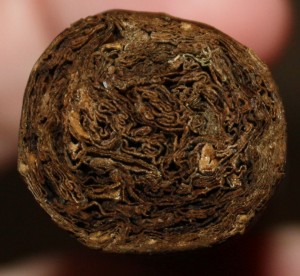 Flavor & Notes: The foot of the cigar offers a delicious mix of cedar, mocha and earth which is simply outstanding.  The cold draw serves up some earthy notes over a base of oats. Once the cigar is lit there are some initial notes of spice, and earth. As we continue into the first third of the cigar, the Nicaraguan spice begins to shine through as the cigar takes on some sweet notes in the background. The second third of the cigar becomes ultra smooth and the spice mellows considerably. The notes on the second third are a mix of leather, and wood with a hint of mocha on the finish. The last third the cedar remains constant, as some nuts join the mix with a slightly leather-like finish.

Smoking Characteristics: The Carlos Torano Loyal is a slow burning cigar with a solid burn line. The medium gray ash held on strong for about a third of the cigar at a time. The draw was perfect, and the rich voluptuous  smoke-filled the room with a nice aroma. The imperfections of the roll of the cigar had no bearing on the enjoyment of the cigar.

Conclusion: I look at the cigars in a humidor as two schools of though. There are your traditional cigars that cater to the old school smokers, while the others cater to the new school cigar connoisseurs. The Loyal reward those in the traditional camp with a cigar that is well-rounded, flavorful, and enjoyable from first light to last puff. Even if you are a new school tobacco lover, the Loyal is a nice example a classic cigar.