Today I have the genuine pleasure of reviewing the Camacho Liberty 2012! The Camacho Liberty is the crown jewel of the Camacho (Which is part of Davidoff) line, and one of the most highly anticipated cigars each year. In the past, the Camacho Liberty has been comprised of tobaccos from a variety of different origins and vintages. The 2012 blend uses five priming’s solely from an authentic Corojo crop of 2008, all grown on the same lot, and specifically for this project. The Camacho Liberty 2012 is limited to 2000 boxes of 20, which equals 40,000 total cigars. I was excited to try out this new blend, and luckily got my hands on some and fired one up, here are my thoughts. 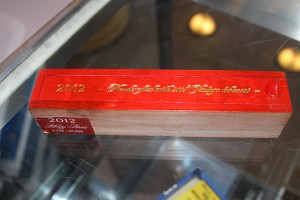 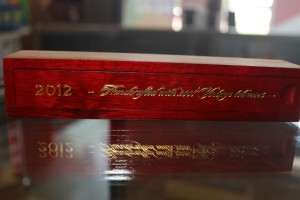 Construction and Appearance: The Camacho Liberty 2012 I smoked for review was from the box numbered 238 out of 2,000. Each one comes in an individual coffin with a red lid on top of it, which has 2012 – Handcrafted with 2008 Vintage tobacco – written on top of it. The side of the coffin also lists which cigar of the run it was, this one was 4,742/40,000. The cigar itself has two bands on it and is made in the 11/18 perfecto style. The top band is similar in style to many Camacho bands I’ve seen, such as the triple maduro. It has a large C in the middle with Camacho written above. The main difference is the color scheme, which is very patriotic, red, gold, and blue stars I guess white didn’t make the cut? Below is written 2012 and liberty series on either side. The bottom band on the tapered foot simply says liberty series. The wrapper is medium brown with a reddish tint and has little veins to it, a nice oil, and is just simply stunning to look at. 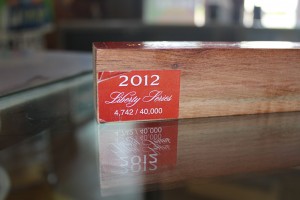 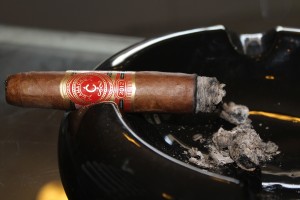 Smoking Characteristics: I take care lighting up the Camacho Liberty 2012, using cedar spills as to make as small of an impact on the flavor as possible when lighting. It fires up with a complex blend of rich flavors, including cedar, natural tobacco, grassy notes, and dill. The smoke is deliciously rich, creamy, smooth, and just tantalizing. The draw is absolutely perfect, each puff easily producing a full body of the savory smoke. The smoke just billows from the stick between draws, filling the air around me with its aroma. The burn line is tight, and the ash holds firmly at the end of the stick.

Into the second third, the flavor evolves in a very pleasing fashion. There is a bit of cedar, dill, natural tobacco, grass, and a new rich orange peel flavor. The smoke is still just cool, rich, delicious, creamy, sweet, and cool. The draw remains excellent, and easily provides a full body of smoke. The flavors are even richer and fuller once I burn into the thickest part of the cigar. On the retrohale there is a nice mild spice and I can place the strength around medium.

Into the final third, the Camacho Liberty 2012 is just loaded with all the rich delicious flavors that it has been presenting all along. All the notes of cedar, orange peel, dill, natural tobacco, and light grass remain. The burn line stays very tight, and the ash still holds very firm. The flavors are still very rich, and have an excellent element of complexity to them. The Camacho Liberty 2012 smokes cool to the nub, and comes in at just over a 2 hour smoke. 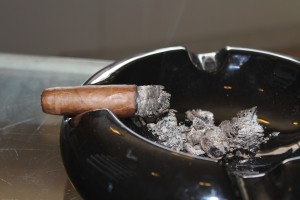 Conclusion: The Camacho Liberty 2012 is an excellent smoke if you are lucky enough to get your hands on one. The production however is very limited so it might be hard to seek one out. It is a rich, creamy, complex cigar with excellent flavors that was very enjoyable. It provided me with 2 hours of absolute relaxation. I’d recommend this one for a box purchase, if you can find one! It combines everything you could desire in a cigar, complexity, perfect construction, and total relaxation.