A while ago Barry, the former owner of A Cigar Smoker’s Journal, reviewed one of the sticks I just can’t get enough of, the CAO MX2 Box Pressed. He wanted to compare the flavors of the (at the time) new box pressed MX2 with the classic MX2, however there was not a review of the classic MX2 on the site at the time. In order to help complete this comparison here is my review of the CAO MX2 Toro so that you can compare it with the flavors of the CAO MX2 Box Pressed which was reviewed here.

The CAO MX2 is a very popular offering from CAO, which is now a part of the General Cigar Co. It is known as the MX2 because it features both a Maduro wrapper and binder, maduro x 2 (get it?).

Construction and Appearance: The CAO MX2 has a nice cut away black band with silver writing on it. The top part says CAO and below it is written MX2. The wrapper of the CAO MX2 Toro is almost as dark as the band, pretty much dark chocolate in color, with very little veins and a nice oil gloss. The sample smoked for review was evenly packed and had no visible flaws.

Flavor and Notes: The wrapper of the CAO MX2 Toro has notes of deep oak and sweet chocolate, an enticing combination. The foot has the scent of oak, chocolate, hay, and spice. I opt for a straight cut on the CAO MX2 Toro and on the cold draw there are flavors of chocolate, coffee, oak, and a little spice. 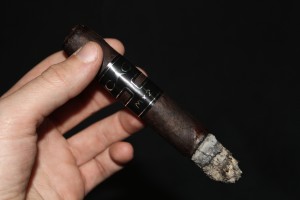 Smoking Characteristics: The draw on the CAO MX2 Toro starts out just a bit tight, but still produces a fair body of smoke. The flavors in the first third are a very rich blend of chocolate, coffee, pepper, oak, and a bit of cream. The burn line is very tight, nearly razor sharp. The ash is almost snow white, and easily holds firm at the end of the stick. The smoke is rich, cool, creamy, and very smooth, it leaves a nice blend of cocoa and oak on the palate between draws.

Into the second third, most of the pepper has subsided from the flavor profile. The blend now consists of cocoa, coffee, oak, and cream. The draw really opens up at this point, and is providing me with a nice full body of smoke on each puff. During the start of this third, the burn line becomes a little uneven, but by the end of this third it manages to correct itself. The strength in this third is between medium and full, and you can really feel the spice on the retrohale even when it is not very present at all in the smoking profile. The smoke is still rich, cool, creamy, and very smooth.

During the final third, the oak spice and pepper reemerge strongly into the flavor profile. The cocoa still remains, along with the coffee and cream, but they are now less pronounced. The burn does become a bit awkward again, but not enough so to require any correction. The draw remains excellent, providing me with a full body of the rich, cool, creamy, smooth smoke. The snow white ash continues to hold firm easily past the one inch mark. The CAO MX2 Toro smokes cool to the nub without pulling any heat.

Conclusion: While Barry felt a little awkward smoking a box pressed (yet when he realized how much it improves the flavor in some blends, it became a favorite size of his), I have always preferred box pressed vitolas. While the flavor in the CAO MX2 Toro was very nice, and appreciable, the CAO MX2 box press is the better cigar. I feel as if the flavors are much richer and a bit more complex in the box pressed format. The CAO MX2 Toro did perform well, not requiring any actually correction for the draw or burn. Even if the burn was not perfect. The strength was nice and it made for an excellent mid afternoon smoke.