The Davidoff Nicaragua may just be one of the most highly anticipated cigars of 2013. When it was announced that Davidoff would be venturing into the world of Nicaraguan tobacco, many people, myself included, were very intrigued. Nicaragua has become one of the “hottest” countries for cigar production in the past few years, and Nicaraguan puros have started to become very popular. So, for obvious reasons, I was excited to see how a Nicaraguan puro from Davidoff would turn out.

Construction and Appearance: The Davidoff Nicaragua Robusto features two bands, the top one is styled like the typical Davidoff band and is black with a silver trim and silver writing. In the center of the top band it says Davidoff, on the left side Robusto, and on the right side Geneve. The second band is a deep, almost rust colored, orange. In the center it says Nicaragua and on both sides there are 3 triangles which are made up of 3 triangles.

The wrapper of the Davidoff Nicaragua Robusto is a medium reddish brown, with very tiny veins, and is smooth to the touch. The sample smoked for review had a very tight cap, and no soft spots that I could detect. 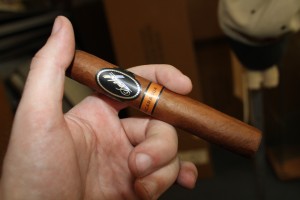 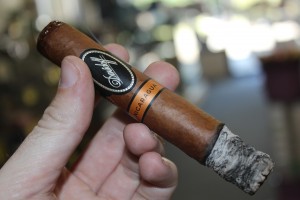 Smoking Characteristics: The Davidoff Nicaragua Robusto kicks off with a blast of white pepper and spice. After few draws, the pepper starts to fade a bit, and is joined by notes of nuts, earth, cedar, and a little leather. All the flavors finish long on the palate between draws, along with a very light sweetness. The draw is a bit tighter than I prefer, but the smoke production is ample. In terms of strength in this first third, the Davidoff Nicaragua Robusto is coming in at a solid medium.

Into the second third of the Davidoff Nicaragua Robusto, the flavors start to become a bit more refined, defined, and complex. The white pepper fades from the profile entirely, but the spice remains. The blend takes on a much sweeter dimension and some notes of espresso join the blend as well. The flavors of nuts, earth, cedar, and leather have all remained from the first third. The strength remains in the medium range, and the draw has opened up to the resistance I prefer. The ash holds firmly well past the inch point, but the burn has needed one correction.

During the final third of the Davidoff Nicaragua Robusto, the flavors continue to remain very well defined, and the blend takes on additional sweetness. There is now a nice little vanilla undertone with the sweetness which pairs well with the other flavors. The notes of nuts, earth, cedar, leather, and espresso have all remained, and the espresso and cedar are now much more dominant in the profile. The construction during this third is excellent, the ash holds firmly, and burn has required no additional corrections. I smoke the Davidoff Nicaragua Robusto to the nub, and it remains quite firm and only becomes slightly warm to the touch at the end. 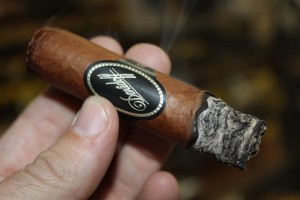 Conclusion: The Davidoff Nicaragua Robusto performed very well, but wasn’t really what I had expected. When I heard a Nicaraguan Davidoff was coming out I had expected something with a lot more strength, and a much different flavor profile. However, I did love the Davidoff Nicaragua, the flavor was quite complex, and very well defined. Overall I would say this was interesting blend, and one especially worth trying for Davidoff fans. As for myself smoking this regularly is a bit cost prohibitive, as $13.90 for a robusto is getting up there, but I know I’ll pick up some more eventually.

Rating: 92 (Price was not factored into the score)