Camacho has announced the release of a Special Limited Edition cigar to commemorate the retirement of Mike Ditka’s jersey #89 on December 9, 2013. Only 2,000 boxes will be produced in 20-count boxes in a 6×50 Toro format and the product will ship to stores at the end of November. Only 500 boxes will be available in 2013. The cigars will retail for $12.50/ea and $250.00/bx. You can always visit the Camacho website for information on all of their cigars!

From the Camacho Sell sheet to retailers:

Introducing the new Ditka 89 Limited Edition. This new limited release was developed in honor of Ditka’s upcoming jersey retirement ceremony, which is set to take place on December 9th, 2013 at Soldier Field. Drafted by Chicago as the fifth overall pick in the 1961 draft, Ditka was a presence that was immediately felt across the NFL and the first ever to play the tight-end position. Ditka spent the next five years playing for the Bears, earning a Pro-Bowl trip each season. Bears team Chairman, George McCaskey, has announced that this will be the final number to be retired by the team.

The cigar, available only in Toro format, is built with fillers from the DR and Honduras, binder from Nicaragua and a Mexican maduro wrapper from the San Andres Valley. Four out of five on our intensity meter, this blend possesses the stoutness expected of a cigar that bears the name of this legendary Hall of Famer.
The new Ditka 89 begins shipping nationwide in late November 2013 and is limited to 2,000 boxes
and 40,000 total cigars. 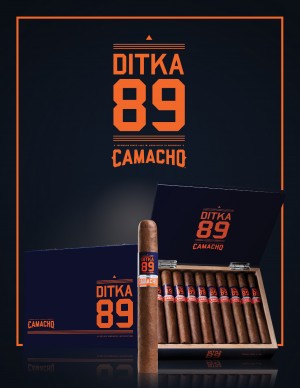